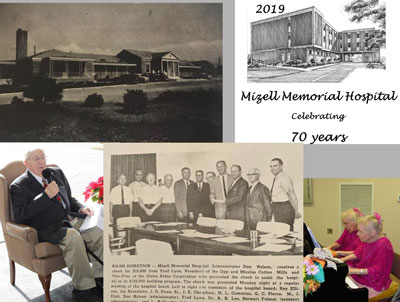 A collage of different images showing the History.


A meeting of the Trustee-Directors of Mizell Memorial Hospital Inc was held on December 10, 1945, at the office of F.M. Lyon in the City of Opp. Present were R.S. Jeffcoat, J.L. Channell, Sr., F.M. Lyon, J.C. Foster, Jr., H.D. Danley, E.R. MacLennon, H.W. Waters, Sr, J.C. Hurst and G.C. Pierce all members of the Trustee- Directors. Mr. Jeffcoat was chairman of the meeting and Mr. Lyon was secretary. The Chairman stated that a charter incorporating Mizell Memorial Hospital, Inc had been secured and it was moved, seconded, and unanimously resolved that the charter be accepted. The meeting held a general discussion of plans for hospital promotion, raising of money, selection of site and construction of buildings.

On Thursday, December 8, 1949, a crowd gathered to hear Senator Lister Hill and Congressman George Grant speak and dedicated Mizell Memorial Hospital. Fred Lyon and other civic leaders, along with the Opp & Micolas Mills, who were responsible for raising funds for the original building attended the ceremony. The hospital was named for the late Charles Wesley Mizell who was a prominent textile manufacturer, banker, and businessman and cost approximately $500,000 to build. The building itself an example of modern architecture with a pitched roof, sitting atop the gently sloping hill was how the hospital was described on that day.

From a 29-bed facility in 1949, the hospital added a wing in 1957, followed by a new surgical wing in 1963. Growing vertically in 1969 from one to three stories, a new three-bed intensive care unit was also established. Changes throughout the years have included addition of in-house nuclear medical services, certified sleep center, Senior Behavioral Care Unit, and various renovation projects of different areas. In addition to the hospital facility, Mizell also expanded services to include a world class Wellness Center and the addition of the Mizell Medical Clinic for primary care. These changes provide more privacy, streamlined processing, and more convenience for the patients of the hospital.

Today, Mizell Memorial Hospital is currently licensed for 99 beds with an operating capacity of 59 beds. The active medical staff consists of physicians and surgeons in family practice, pediatrics, radiology, gynecology, and general surgery. Mizell Memorial Hospital employees over 200 hundred people that are committed to the hospital's mission of providing quality healthcare with hometown compassion.

Mizell Memorial Hospital is a private, not-for-profit, acute care facility, governed by a local volunteer board of directors made up of individuals from the community. This type of local leadership is what allows the hospital to grow with the needs of the community.

Mizell Memorial Hospital has proudly served our community for over 70 years. 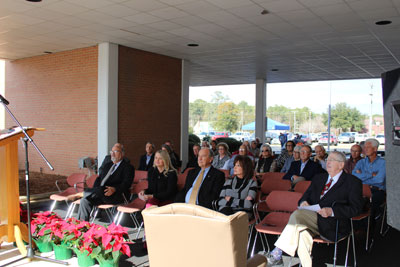 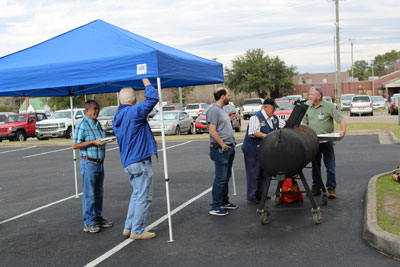